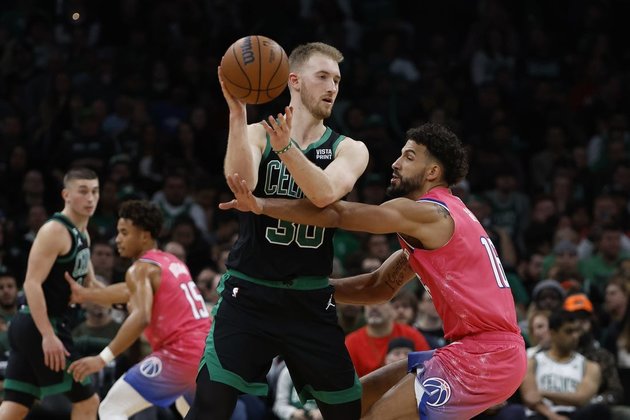 The Charlotte Hornets will be without guard Gordon Hayward when they visit the Boston Celtics on Monday night.

According to multiple reports, Hayward has a fractured left shoulder and is expected to be out for an extended period of time.

Hayward, 32, missed eight consecutive games earlier thismonth with what was originally termed a shoulder contusion. He played in three consecutive games before sitting out Friday night's 110-108 victory over the Minnesota Timberwolves due to the shoulder injury.

Hayward has appeared in 11 games this season. He's averaging 16.3 points, 4.3 rebounds and 4.4 assists while shooting 44.5 percent from the field and 38.1 percent from 3-point range. He spent three seasons with the Celtics, who sent him to the Hornets in a sign-and-trade agreement in 2020.

Boston was without star forward Jason Tatum (ankle) for Sunday night's 130-121 victory over the Washington Wizards. It was the third game of a six-game homestand for the Celtics, who have won three in a row. It was also the first game Tatum has missed this season.

Tatum injured his ankle against the Chicago Bulls last Monday, but he played in Wednesday's 125-112 victory over the Dallas Mavericks and in Friday's 122-104 victory over the Sacramento Kings. He was Boston's leading scorer and rebounder in each game.

"I think it just depends," Boston head coach Joe Mazzulla said when asked if Tatum would play against Charlotte. "We'll collaborate on what we think's important for him and our team in the short-term and long-term."

Jaylen Brown poured in a game-high 36 points in Sunday's win and was one of seven Boston players who scored in double figures. Malcolm Brogdon (17 points), Derrick White (15), Al Horford (14), Marcus Smart (14), Sam Hauser (14) and Luke Kornet (12) were the others.

The Celtics had a 26-6 edge in points off turnovers and led by as many as 26.

Charlotte's Kelly Oubre scored 28 points in Friday's victory over Minnesota. Terry Rozier added 22 points and eight assists in the win, which gave Charlotte back-to-back victories for the first time this season. The Hornets beat the Philadelphia 76ers 107-101 on Wednesday.

"We're figuring out how to play," Charlotte forward PJ Washington said. "The game we played (against Minnesota) and the one before are two that we can grow from. If we play to our strengths it is going to be hard for teams to beat us."

Charlotte also received career highs in points (nine) and rebounds (12) from second-year pro Kai Jones, a 6-foot-11 forward who is averaging 7.2 minutes per game this season.

"I don't see that he's doing anything that he can't do every night," Charlotte head coach Steve Clifford said. "He's playing to his real strengths -- he's tough, he's a terrific athlete, he's got a nose for the ball and he's playing very smart. All our coverages and stuff like that he's doing a good job with so we're organized on both ends of the floor when he's in the game. Usually that's a big challenge for younger players."