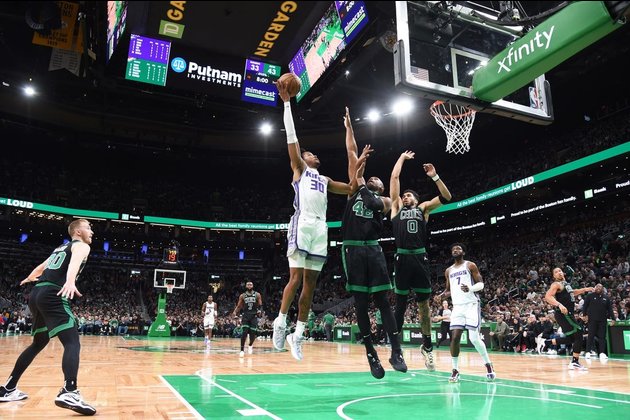 Foul-plagued Jayson Tatum scored 30 points and led a third-quarter surge Friday night that propelled the Boston Celtics to a 122-104 victory over the visiting Sacramento Kings.

Jaylen Brown, also dealing with foul trouble, chipped in with 25 points for the Celtics, who won for an 11th time in their last 12 games.

De'Aaron Fox had a team-high 20 points for the Kings, who rallied from a double-digit, first-half deficit to lead 84-78 on a Kevin Huerter layup with 4:04 remaining in the third period.

Despite Tatum, Brown and Marcus Smart all having four fouls at the time, the Celtics took over from there, beginning with a 16-0 flurry to end the third quarter.

Tatum had seven of his 30 points in the run, and Payton Pritchard, who hadn't played in the first 33 minutes of the game, came through with two free throws and a 3-pointer with 1:37 remaining in the period that gave Boston the lead for good at 87-84.

Up 94-84 at period's end, the Celtics didn't let off the accelerator, scoring 19 of the fourth quarter's first 23 points to break things wide open at 113-88. Pritchard hit another 3-pointer in the run, while Brown contributed 10 of his 25 points.

Tatum's 30-point game was his second in a row and 10th of the season. He hit 10 of his 17 shots and also found time to lead the Celtics in rebounds with eight.

Derrick White added 16 points and Al Horford 13 for Boston, which improved its best-in-November record to 11-2.

White and Horford combined for six of the Celtics' 16 3-pointers. Boston outscored the guests 48-27 from beyond the arc despite taking just one more attempt.

Domantas Sabonis notched an 18-point, 10-rebound double-double to complement a game-high six assists for the Kings, who were completing a four-day, three-game Eastern swing that began with a seventh straight win at Memphis.