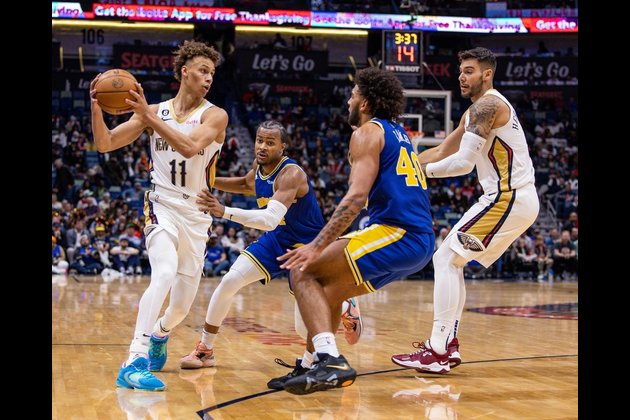 The New Orleans Pelicans will hit the road for the Thanksgiving holiday and start in San Antonio on Wednesday night to square off against the struggling Spurs.

The Pelicans have won four of their past five games, including 128-83 over short-handed Golden State on Monday in the finale of a six-game homestand. Brandon Ingram scored a season-high 34 points in the win, with Devonte' Graham adding a season-best 19 points off the bench.

New Orleans also got 15 points from CJ McCollum while Jonas Valanciunas had 10 points and 13 rebounds and Jose Alvarado tallied 10 points. The Pelicans created 26 turnovers, 15 of them steals, against a Golden State team that was without Stephen Curry, Klay Thompson, Draymond Green and Andrew Wiggins.

New Orleans forged a 19-point lead after one quarter and was ahead by 24 at halftime. Ingram had 20 points before the break.

As if New Orleans needed it, Zion Williamson was back after missing three games with a bruised foot. He had nine points and four assists in 23 minutes.

The Spurs will head home after a disastrous five-game trip in which they lost in San Francisco, Portland, Sacramento and in Los Angeles twice, with the average margin of defeat 23 points per game. The closest game on the trip was a 117-110 loss to the Trail Blazers. That was the only game of the five that San Antonio had all of its regular starters available.

The Spurs' most recent setback was a 123-92 loss Sunday to the Lakers, who won easily despite playing without injured LeBron James. San Antonio was down by 18 at the half and then missed its first 11 shots of the third quarter to put to rest any notion of getting back in the game.

Devin Vassell led San Antonio with 17 points, with Keldon Johnson and Jeremy Sochan scoring 12 each, and Tre Jones and Josh Richardson adding 10 apiece. San Antonio, which has dropped 10 of their past 11 contests, played without Jakob Poeltl, who had been its leading scorer in two of its past three games.

"We have a young team. Winning is hard in the NBA," said Gorgui Dieng, who started in Poeltl's spot. "They're learning. Whether you win or lose, just make sure you have the right habits. Tonight was a very bad game for us."

"The end of a long road trip, five games in seven nights, is always going to be difficult," Brown said after Sunday's loss. "We're better than we played (Sunday). They have competed at a far greater level than they did tonight. We will respond. They're a prideful group."

Wednesday's game will mark the first contest in a three-game homestand for San Antonio. Nine of the Spurs' next 11 contests will be at home.

NEW YORK, New York- U.S. stocks were uneasy early Wednesday following a release of a raft of economic data but ...

OTTAWA, Canada: Canada has launched its Indo-Pacific strategy, which includes spending worth $1.7 billion, with the aim of enhancing military ...

Italy to raise billions with windfall tax on energy companies

ROME, Italy: A draft of the government's 2023 budget seen by Reuters indicates that Italy plans to charge energy companies ...

LONDON, England: In a world aviation first, British company Rolls-Royce has announced that it has successfully tested a hydrogen-powered aircraft ...

King could step in if Malaysia parliament cannot choose leader

KUALA LUMPUR, Malaysia: As support for a conservative Islamic alliance prevented major coalitions from winning a simple majority in its ...

BUFFALO, New York: Just ahead of the busy Thanksgiving holiday week, western New York state was hit by a snowstorm, ...

After 73 years, Biden tells Palestinians to wait until conditions are right

NEW YORK CITY: Granting Palestine full state membership status at the UN would be a "practical" step that could preserve ...

WASHINGTON D.C.: In the largest dam removal undertaking in U.S. history, a U.S. agency last week approved the decommissioning of ...