Warriors return home to try to finish off Grizzlies 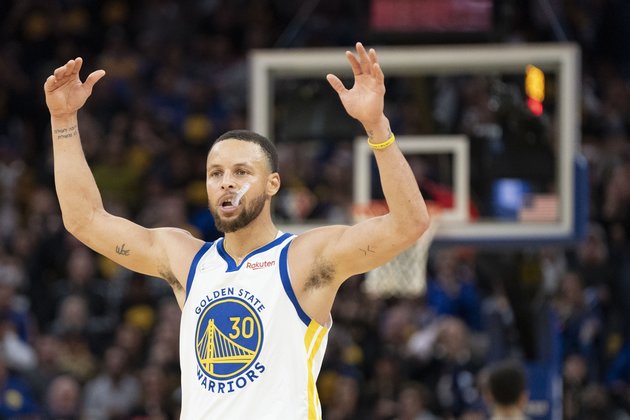 The Memphis Grizzlies may have the momentum, but the Golden State Warriors have history on their side when the Western Conference semifinals continue Friday night with Game 6 in San Francisco.

Facing elimination in the best-of-seven Wednesday and lining up without leading scorer Ja Morant, the Grizzlies dominated Golden State on both ends of the court in a historically lopsided 134-95 home win in Game 5.

A second straight Grizzlies win would send the series back to Memphis for Game 7, an advantage the second-seeded club earned by finishing three games ahead of the third-seeded Warriors in the regular season.

But Golden State's 117-116 win at Memphis in Game 1 flipped the home-court edge in the series to the Warriors, giving the recent three-time NBA champions the inside track to earning a berth in the Western Finals for the sixth time in eight seasons.

"We've shown we're a resilient team this year," Golden State star Stephen Curry insisted after the Game 5 blowout, the largest in the postseason for the club since 2014. "We have the right mindset, the right approach, and all the tools we need to show who we really are in Game 6."

The Warriors are expected to still be without coach Steve Kerr, who tested positive for COVID-19 before Game 4. Longtime assistant coach Mike Brown directed the Warriors in in Game 4 and Game 5. Brown has been named as head coach of the Sacramento Kings, effective after the season.

At home, the Warriors have been unbeatable during the playoffs. They won three home games in a row by an average of 13.3 points over the Denver Nuggets in Round 1 and crushed the Grizzlies 142-112 in San Francisco in Game 3 of this series as the visitors watched Morant go down with a knee injury.

But Memphis, as it has done all season, has responded well to seeing its star in street clothes on the sidelines. The Grizzlies were without Morant for 25 games in the regular season, winning 20 of them. And in Game 4 they led for almost 46 of the 48 minutes despite shooting poorly (41.7 percent overall, 25.7 percent on 3-pointers) but the Warriors escaped with a 101-98 decision.

Then in Game 5, the Grizzlies' shots fell at a rate of 47.5 percent, including 43.9 percent on 3-point shots, and they buried the Warriors early. Memphis led by 10 after the first, 27 after the second, and 52 points after the third quarter. The lead topped out at 55.

The Warriors had averaged 119 points in their first eight playoff games, but they have averaged just 98 over the last two.

Since their championship run began in 2015, the Warriors have won six of eight Game 6s, including a 108-95 win at Memphis that ended their second-round series seven years ago.

That's ancient history to the Grizzlies, who began the season as the third-youngest team in the NBA. Morant and many of their other players were still in high school in 2015.

One of those guys, 22-year-old Jaren Jackson Jr., is the key to the Grizzlies' chances in Game 6, teammate Dillon Brooks insists.

"They got no one to guard him, no one to stop him," Brooks claimed. "I try to tell him to stay aggressive, and you're a walking mismatch out there for every single player that guards you. So just keep attacking."

Jackson has topped 20 points three times in the series, including a pair of 21-point efforts since Morant left the lineup.

The Warriors hope to counter with defensive ace Draymond Green, a fellow Michigan State alum, albeit a decade earlier.

"It doesn't feel good losing by as much as we did," Warriors veteran Klay Thompson admitted after Wednesday's loss. "But it's just a loss. You flush it and you remind yourself who you are.