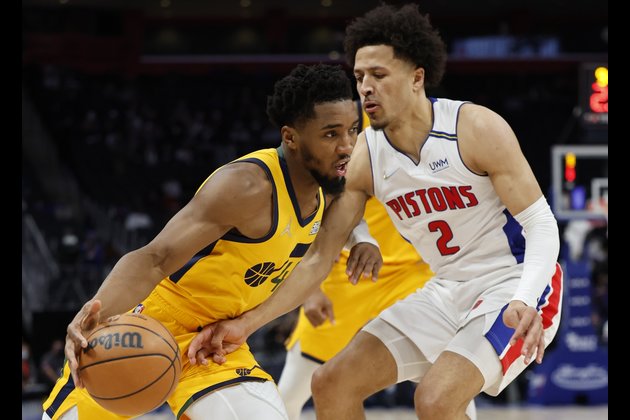 There are nights when teams don't play their best basketball but get away with it.

Take the Cleveland Cavaliers. They made plenty of mistakes against the Sacramento Kings on Monday, including giving up 20 points on 17 turnovers and not scoring in the final 2 1/2 minutes, but still escaped with a109-108 victory.

There are other nights when teams don't play their best basketball and don't get away with it, not even against teams with bad records.

That scenario describes the recent plight of the Utah Jazz, who host the Cavs on Wednesday in Salt Lake City after finishing a rough five-game road trip with an embarrassing 126-116 loss to the Detroit Pistons.

En route to their third straight defeat, the Jazz blew a 22-point lead and allowed the lowest-ranked offensive team to score 78 points on 59.1 percent shooting in the second half. Detroit hadn't beaten Utah since Jan. 25, 2016. None of the players from that Pistons team are on the roster.

"You can't get up by 20 points or something and lose. You just can't," Mitchell said Tuesday. "We're fooling ourselves if we say we are going to win a championship and we have a night like tonight, the last two nights really. At a point, we've just got to do it. You've just got to go out there and do it. We've got to communicate. We've got to have each other's backs."

Utah ended its long road trek with disturbing results, losing 122-108 in Toronto and 125-113 at Indiana. That's an average of 124.3 points allowed in those three setbacks.

The Jazz defense has struggled mightily with three-time NBA Defensive Player of the Year Rudy Gobert in the league's health and safety protocol. Once a top-five defense in the league, they have slipped to just 13th in the NBA as of Tuesday in points allowed per game (107.5).

"When you don't have the defensive player of the year on the floor, you aren't going to be as good," Jazz coach Quin Snyder said. "But we are still good enough to do a lot better than we did in the second half of the game. There's no reason for us to play as poorly as we did."

Aside from Gobert, the Jazz have also been missing key reserves Rudy Gay and Joe Ingles, four assistant coaches and a few more end-of-the-bench guys due to COVID-19. It's uncertain if any of them will return in time to play Cleveland. The Jazz don't play again until Sunday in Denver, so that extra time should help.

In spite of themselves, the Cavaliers still held on for a one-point win. Getting double-doubles from Jarret Allen and Darius Garland along with 15 points or more from four other players helped make up for their other shortcomings.

"It's a win so we'll take it but it wasn't our best," Cleveland coach J.B. Bickerstaff said Monday. "We talk about playing with purpose and discipline for 48 minutes. We didn't do that tonight. We can't put ourselves in these types of positions. We have to improve because it's going to cost us down the stretch if we don't."

Utah edged Cleveland 109-108 in their first meeting this season. This is the fourth of a six-game road trip for the Cavs, who've won two of three so far.

LONDON, England: The large British energy firm E.ON Next has delivered an apology after sending warm socks to 30,000 customers ...

PARIS, France: French teachers have begun a nationwide strike organized by teachers unions to protest against class disruptions caused by ...

ATLANTA, Georgia: With a business slowdown caused by a COVID-19 surge in December, Delta Air Lines lost $408 million in ...

DETROIT, Michigan: The market value of Ford Motor Company has reached over $100 billion for the first time, as more ...

Not since the 1936 Olympics in Berlin has a government tried to prevent an athlete from competing in a sporting ...

PARIS, France: French teachers have begun a nationwide strike organized by teachers unions to protest against class disruptions caused by ...

TOKYO, Japan: Twin panda cubs have made their first public appearance before devoted fans at Ueno Zoo in Tokyo. However, ...

TEL AVIV, Israel: An avian influenza upsurge has claimed the lives of over 5,000 cranes in Israel, resulting in the ...

WARSAW, Poland: Poland has emerged as the most recent country in Europe to have reported 100,000 fatalities linked to COVID-19, ...

LONDON, England: A rare warning by the UK's MI5 intelligence agency has revealed that a Chinese agent, Christine Ching Kui ...