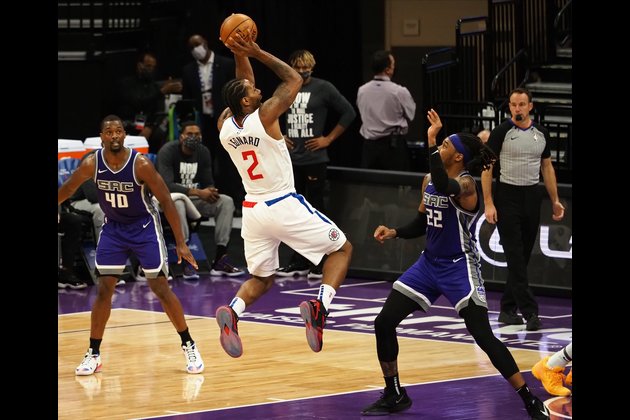 Kawhi Leonard compiled 27 points and six assists as the Los Angeles Clippers cruised to a 138-100 road win over the Sacramento Kings on Friday night.

Paul George scored 26 points and continued his hot shooting from deep, making 4 of 8 from 3-point distance for the Clippers, who won their third consecutive game.

Harrison Barnes and De'Aaron Fox contributed 14 points apiece for the Kings, and Chimezie Metu had 10 points and eight rebounds off the bench.

George scored 20 points and shot 4 of 6 from long distance in the first half to help Los Angeles establish a 69-61 lead.

Both teams traded leads the first 1 1/2 quarters until Morris sank a 3-pointer to move Los Angeles ahead 51-48 with 6:07 left in the first half.

The Clippers briefly went up by double digits for the first time when George sank a 3-pointer with 55.5 seconds left in the half, but Buddy Hield's driving layup made it an eight-point game at the break.

The Clippers were short-handed in the backcourt, playing without starting point guard Patrick Beverley (personal) and backup shooting guard Lou Williams (sore left hip). Jackson made his first start of the season.

Hield, who has produced one of Sacramento's top three scoring averages in each of the previous four seasons, was limited to nine points on 3-of-11 shooting from the floor. It was the 12th time in 13 games this season he failed to make at least half of his field-goal attempts.

SYDNEY, NSW, Australia - Another spike in bond yields, and oil prices sent shares in Asia lower on Friday, however ...

WASHINGTON D.C.: The U.S. securities regulator, the Securities and Exchange Commission (SEC), has suspended trading in the securities of 15 ...

A California federal judge has issued the final approval of a $650 million Facebook class action privacy settlement, handing down ...

WASHINGTON D.C.: President Joe Biden says he expects there to be enough vaccinations for all Americans by the end of ...

HOLTVILLE, California: An overloaded SUV carrying as many as 25 passengers slammed into a semi-truck in California on Monday, killing ...

ALBANY, New York: New York's new coronavirus-period dance rules will allow some dancing at parties. The state said that when ...

WASHINGTON D.C.: Looking beyond the $1.9 trillion COVID-19 relief bill, President Joe Biden and other lawmakers are establishing the foundations ...

WASHINGTON D.C.: The U.S. Justice Department has announced it will appeal a court ruling that the federal prohibition on evictions ...

Once Upon a Time ... in Hollywood