Huawei ban and tariffs on Chinese goods will not slow China 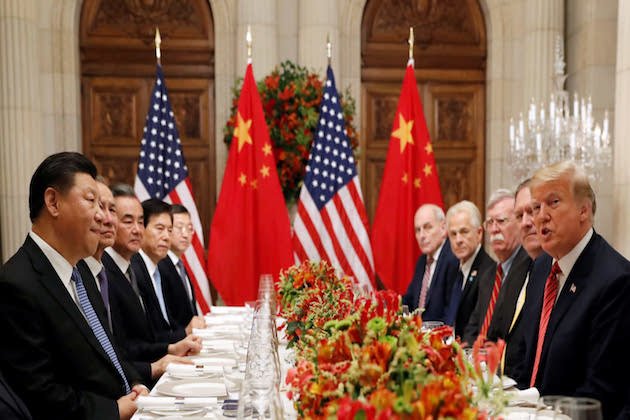 The United States and China have reached a truce in their escalating trade war. Following a meeting between US president, Donald Trump and his Chinese counterpart, Xi Jinping at the G20, the two leaders agreed to renew talks. Tariffs, which began to be introduced by both sides on an array of imports in 2018, will not be raised further.

But a number of tariffs remain and trade relations are still far from normal between the world's two largest economies. This may not be a cold war. But it is a great power rivalry focusing on technological supremacy and which side has the best development model.

China's economy is slowing down and recent tariffs from the US on its exports have not helped. China's growth rate declined from 6.6% in 2018 to 6.4% in the first quarter of 2019. But in the long term, the pressure exerted by Trump's administration will strengthen China. It will help China speed up its efforts to restructure its economy, focus more on innovation, and also boost the country's national pride.

Technological advancements are central to empire building and the rise of new powers, with steam power and then electronic technologies driving previous British and American empires. The fourth industrial revolution will shift international competition away from labour, territory, nuclear arms, and soft power to new technology including robotics, artificial intelligence (AI), and wireless services.

Until recently, US policymakers operated under the assumption that the US was the world's technological superpower and Silicon Valley was the globe's innovation hotbed. China was regarded as a copycat that builds clumsy clones of American technologies or uses its big state-owned enterprises to purchase innovative US companies and absorb their intellectual property and know-how.

But when it comes to 5G – the next generation of superfast internet technology – the US has lagged behind. No American company has comparable wireless equipment to Huawei. This spurred Trump to wage war on the Chinese tech company. First he declared a national emergency, banning sales and the use of telecoms equipment deemed to pose "unacceptable risks". Then he lobbied allies to do the same.

Huawei's 5G capabilities and the fallout from them can be seen as China's Sputnik moment. In the same way the Soviet Union was the first to launch a satellite into space, creating the appearance that the Soviets were winning the engineering challenge of the day, China is outpacing other countries in the development of 5G today. China realises the dangers of technological dependence, economic entanglement, and scientific reliance on the US.

Huawei is a product of the Chinese government's industrial policy strategy. The vision to move up the economic value chain from a low-end manufacturer to a global innovation leader led to the launch of its Made In China 2025 initiative and an Artificial Intelligence Development Plan to channel resources into strategic sectors such as computing, AI, robotics, and aerospace.

China aims to achieve an AI self-sufficiency manufacturing rate of 80%, minimising its dependence on other countries for the complex parts needed in this tech. It also aims to become a leading technology hub in AI by 2030. This is bearing fruit, as in 2017, 48% of global AI funding was Chinese compared to 38% being American. Chinese AI company iFlyTek often beats Facebook, Alphabet's DeepMind, and IBM's Watson in competitions to process natural speech, even in its "second language" English.

China is now the world's biggest producer of scientific research papers and Semantic Scholar, the academic search engine for scientific articles, suggests Chinese scholars have surpassed their US counterparts in producing AI papers.

So the Huawei ban and tariffs on Chinese goods will not slow China – they will stimulate its new innovation system and boost scientific research aimed at becoming more independent.

Another consequence will be an acceleration of China's attempt to rebalance its economy away from external demand and investment towards domestic consumption. This started in 2008 with the global financial crisis and has become increasingly necessary as China's middle class develops. Since then large-scale government-led infrastructure investments, measures to increase household income, reductions of income tax, and improvements to social welfare systems have helped grow domestic consumption.

When Trump first announced tariffs in 2018, China's domestic consumption was responsible for 76.2% of its GDP growth, and the Chinese stock market absorbed the impact and bounced back after an initial sharp decline. Since then, the Chinese government has introduced new policies to boost domestic consumption further, including more tax cuts, improved childcare, and elderly care initiatives and incentives. So the trade war has helped China's efforts to redistribute wealth and restructure its economy.

The trade war has also rallied the Chinese public around its government. US treatment of Chinese companies has been perceived as bullying and people have compared it to the way that the British Empire forced unfair trade practices on China in the 19th century. This topic is incredibly emotive in Chinese society and has boosted domestic support for the government.

The Chinese word for crisis is composed of two characters – one for danger and the other for opportunity. The country's ability to capitalise on the current challenge from the US will strengthen it for years to come.

NEW YORK, New York - Stocks in Asia were mostly on Wednesday, in line with the sell-off globally a day ...

Vouchers instead of refunds in case of canceled flights disappoint

One of the lessons the current coronavirus pandemic has taught us is that we depend on electronic devices more than ...

Demand for oil may have peaked

PARIS, France - Although crude prices have rebounded from coronavirus crisis lows, oil executives and experts are starting to ask ...

Countries across the globe re-thinking reopening as coronavirus surges

As coronavirus cases around the world approach 11.5 million, governments are struggling with how to reopen their economies, leading some ...

North Dakota pipeline supported by Trump ordered to be closed

A U.S. federal judge ruled Monday that a controversial pipeline that runs through Native American lands in North Dakota be ...

Yair Netanyahu making name for himself at home and abroad

JERUSALEM - As scandal-plagued Prime Minister Benjamin Netanyahu stands trial for corruption, his 28-year-old son has emerged as a driving ...

WASHINGTON, DC - Broadway actor Nick Cordero, aged 41, has passed away after a long battle with coronavirus.According to Variety, ...