Could a weakening US economy imperil Trump's trade war against China? 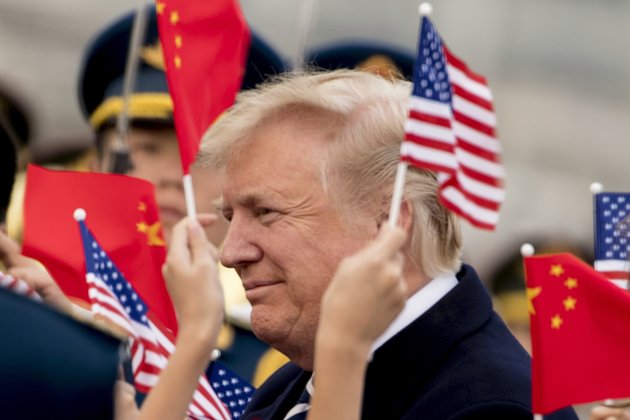 President Donald Trump's trade war with China is based on two basic and complementary assumptions: the U.S. economy is strong and, perhaps more importantly, stronger than the Chinese economy.

Last summer when the war began heating up, both assumptions were certainly true. The American economy was booming, while China's was slowing. Hence, the U.S. was in a better position to withstand any pain in a tariff war of attrition.

But the first of those assumptions, at least, is beginning to falter as signs grow of economic weakness in the U.S.

As an economist who conducts research in international trade, I believe that a weaker U.S. economy would likely affect Trump's ability to engage in a prolonged trade war with China - no matter how much he might want to.

The U.S. economy has been expanding for a decade now, and no economy can continue to grow indefinitely. The May jobs report was the latest indicator that the party may be coming to an end.

The report showed that the U.S. economy added only 75,000 jobs that month, a significantly lower number than the 224,000 jobs added in April. Even though the unemployment rate stayed at the extremely low figure of 3.6%, worryingly, there was virtually no wage growth. In addition, another key metric, the so-called ISM Manufacturing Index, fell to its lowest level in Trump's presidency in May.

And while GDP growth has remained fairly robust, there have been other harbingers of underlying weakness in recent months, including a bond market signal that a recession may be on the horizon and a broad measure of the health of the U.S. economy that recorded its slowest increase in more than two years.

Putting this all together, it suggests a key premise behind Trump's trade war with China may not hold up for much longer.

One of the reasons to blame for economic sluggishness is the trade war itself and specifically Trump's use of tariffs to prosecute it.

Contrary to what he has said in the past, elementary trade theory shows that tariffs not only hurt the intended target but the tariff-imposing nation as well. This fundamental theoretical prediction is now being borne out in practice.

For instance, a recent and ongoing study by a group of economists shows that the higher prices resulting from Trump's tariffs on China have been paid largely by U.S. retailers, and some of them may soon be passed on to consumers. A separate study focused on washing machines found that tariffs resulted in an average 12% increase in the price of the appliance, whether it was imported or made domestically.

Then there's the impact of the retaliatory tariffs. Studies show that the U.S. coal, crude oil and agricultural sectors have all been detrimentally affected by Chinese tariffs imposed in response. In addition, there is reason to believe that the slowdown in American job growth is being felt most acutely in the sectors that are most susceptible to trade tensions such as manufacturing, construction, mining and logging.

In other words, if the deleterious impacts of Trump's trade war with China continue to be felt in an economy that is weakening, it is certainly likely that there will be much greater opposition to these tariffs from industry groups and lawmakers.

These possibilities cast serious doubt on Trump's ability to continue - let alone achieve the concessions he might need to win - a protracted trade war with China.

Fed to the rescue?

Trump may end up having an unexpected ally in the Federal Reserve, however.

Evidence of weakness has already ended the U.S. central bank's policy of monetary tightening by raising interest rates. The latest data will no doubt put considerable pressure on the Fed to actually cut rates to avoid a more sustained slowdown.

If it does, then the Fed-driven stimulation will mitigate some of the pain felt by Americans as a result of Trump's trade war with China and continue to prosecute his trade war.

That being said, it is still too early to say definitively that the U.S. economy is cooling.

And, given Trump's unpredictability, it's impossible to forecast what may happen no matter what. At least for now, the president appears to have no intention of backing down.

But for me, a weakening economy adds to the reasons why this trade war is not only futile but harmful. For one thing, I believe tariffs alone cannot address the underlying structural problems that afflict U.S.-China trade.

And let's not forget that the trade war has global repercussions. The Organization for Economic Cooperation and Development recently warned that an escalation of this trade war - as Trump has repeatedly threatened - will damage the rest of the world, trimming 0.7% off global growth by 2021. That may not sound like much, but this trimming amounts to a whopping US$600 billion in lost economic activity.

It's a reminder that the stakes of this war are enormous.