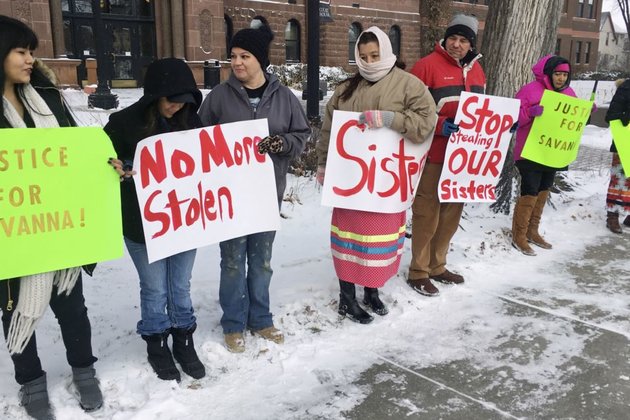 ALBUQUERQUE, N.M. - U.S. House members re-introduced legislation Tuesday that calls for the Justice Department to review how law enforcement agencies respond to cases of missing and slain Native Americans as the nationwide push to bring more attention to the issue gains momentum.

The legislation is named for 22-year-old Savanna LaFontaine-Greywind, who went missing while pregnant in 2017 before her body was found in a North Dakota river. Her baby, who Fargo police said had been cut from LaFontaine-Greywind's womb by a neighbor, survived.

Savanna's Act is among numerous measures that have been introduced at the state and federal level this year to try to address violence against Native American women, who have been victimized at staggering rates for decades.

More than half abused

More than half have encountered sexual and domestic violence at some point during their lives, according to the most recently available federal figures. And there has been growing concern within tribal communities that women have gone missing at a higher rate than federal databases indicate because officers lack the resources and training to document and respond to the cases or because of a mistrust of law enforcement.

"It's almost like people don't know how to deal with this issue," said Rep. Deb Haaland, who is a Democrat from New Mexico and an enrolled tribal member of the Pueblo of Laguna. "This is why we're pressing to know everything."

Savanna's Act aims to address the gaps in data by proposing to expand tribes' access to some federal crime databases, establish protocols for handling cases of missing and slain Native Americans, and require annual reports on missing and murdered Native Americans that will give lawmakers a better handle on the potential scope of the problem.

Haaland along with Reps. Norma Torres, a California Democrat, and Dan Newhouse, a Washington Republican, are the bill's lead sponsors in the House while U.S. Sen. Lisa Murkowski, an Alaska Republican, re-introduced the legislation in the Senate earlier this year.

The bill was unanimously approved in the U.S. Senate last year but died in the House.

Navajo Nation President Jonathan Nez swiftly endorsed the measure after it was re-introduced Tuesday afternoon, saying he hoped leaders could stem the deaths and disappearances of tribal members. He was among some 70 tribal leaders who endorsed the measure, according to Haaland.

SYDNEY, Australia - Dramatic political events in Malaysia, and a widening of coronavirus cases and deaths beyond China put the ...

Bayrob hackers infected 400,000 computers before being taken down

The hackers were like modern-day John Dillingers, brazenly committing their crimes and repeatedly escaping law enforcement's grasp.But like Dillinger and ...